The oviposition behaviour of Leptomydas sardous (Costa, 1884) on Sardinia (Italy) has been recently documented by Luigi Lenzini. image sequence of female fly. The original post on Natura Mediterraneo can be found here.

The larvae of Apioceridae and Mydidae live mostly as predators in the soil although some Mydidae females oviposit in rotting wood and their larvae then feed in the wood. Mydidae larvae have well-developed mouthparts to suck other insect larvae and feed especially on Coleoptera larvae. 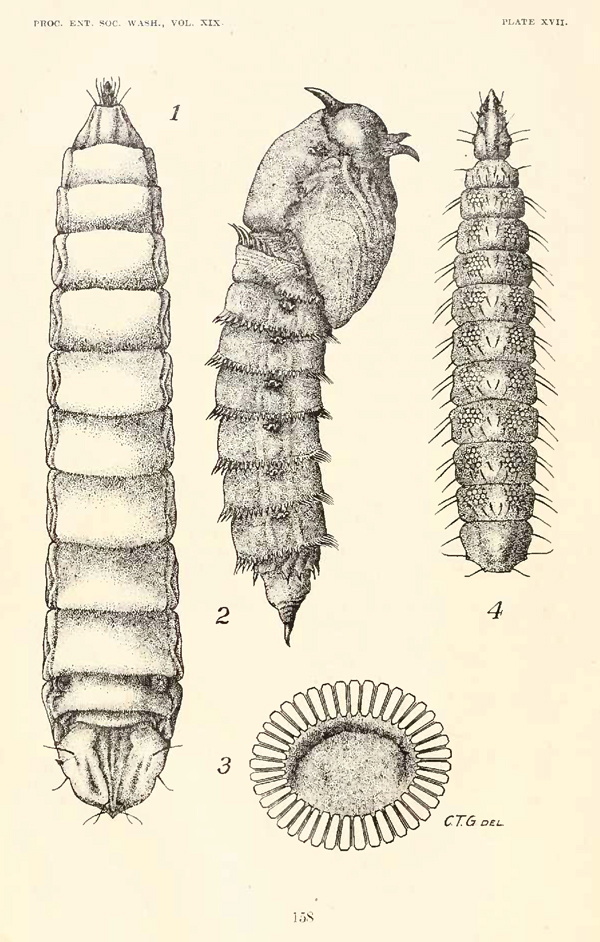 Larva of Eremomidas bek Semenov, 1922. This is the same specimen that was illustrated in the paper by Krivosheina (1976) dealing with the biology of Mydidae in central Asia and was collected in the Karakum desert near Repetek, Turkmenistan. photo © Marina Krivosheina.

The pupae as a resting stage lay some centimetres below the surface in the soil. With the help of their strong spines the pupae make their way to the surface. Here they remain half-buried until the hottest hours of the day when the imago will emerge. The onset of emergence is not fixed from year to year but depends on the weather and other conditions.

Since the 19th century it was believed that adult mydas flies live predatory on other insects in a manner similar to the related Asilidae. However, investigations showed that a fair number of adult males feed on flowers while females seem to rely only on the fatty substances accumulated in their abdomen. Species with vestigial mouthparts do not feed at all. Apioceridae imagines are also feeding on flowers.

For images of habitats in which Apioceridae and Mydidae have been collected see the image gallery.